Hyundai made an important step and introduced a three-door hatchback version for the i30 range in 2012, following the same idea introduced by its sister-brand Kia with the pro-cee’d.
It was the third body version for the i30, after the hatchback and the station wagon. Hyundai tried to access the young customers with a coupe shape and compete against the well-known VW Golf 3-door or the Renault Megane Coupe. But it seemed like the Korean brand came too late to the party since other European carmakers already dropped their 3-door versions from their lineups.

The three-door version of the i30 looked more aggressive than its five-door sibling. It featured new headlights and unique LED daytime running lights. It also sported a black mesh-grille instead of the body-colored one from the five-door version. The raked windshield was even more angled than on the regular hatchback, and the short cabin with its low roof made the car looks sportier. Hyundai added a roof-spoiler on top of the raked-forward tailgate.

Inside, the i30 coupe featured sport bucket seats at the front and a 60/40 split-folding seatback for the rear bench. The carmaker installed an infotainment unit or a CD stereo on the center stack, depending on the trim level. Unlike its five-door sibling, the coupe offered an option for an opening panoramic glass-roof, similar to the one from the station wagon.

Under the hood, Hyundai installed a wide engine choice with outputs between 90 hp and 135 hp, either gasoline or turbo-diesel. A six-speed manual was standard on the entire range, while a six-speed automatic was available for selected engines. 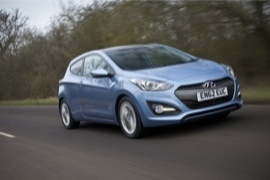