The compact segment vehicles were built in all shapes, including the station-wagon.
Hyundai i30 Wagon came late to the party, but it didn’t come unprepared.

Peter Schreyer took a big challenge when he moved to Hyundai-Kia after a successful career at Audi. He was responsible for designing the first generation of the TT and, for the Korean brands, responsible for the entire lineup. His ideas worked wonders for Hyundai, and, in 2011, he refreshed the i30 lineup look.

On the front of the 2020 i30 Wagon, there was a new bumper with a more aggressive design. A larger grille with a new design for the mesh was introduced. A new pair of headlights with built-in daytime LED running lights. Apart from the N-Line that featured black mesh on the front, the rest featured classic, chromed elements. In the back, the new taillights received new. V-shaped LED graphics to match the front daytime running lights. The raked D-pillars might remind those of the Audi A4 Avant. A roof-spoiler was installed on top of the tailgate.

Inside, the 2020 i30 Wagon received an improved infotainment system with a 10.25” screen, a carry-over from the Kona and Ioniq. For the instrument cluster, a 7” TFT display replaced the analog dials. It offered Apple CarPlay and Android Auto compatibility. Since the roofline was longer, the rear passengers didn’t have a problem with the headroom. Like on the rest of the range, the split-folding back seat seatback extended the trunk area. 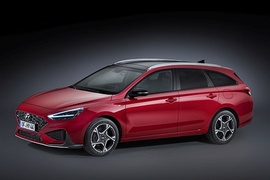