The updated version of the Hyundai i40 Wagon is a clear statement of the Korean manufacturer regarding the European market.
It represents an alternative for the well-established D-segment station wagons. Their target was to build a vehicle with a touch of luxury at affordable prices. Its suspension was tuned for fast driving and installed with up to 18” light-alloy wheels on it.

The most important modifications were made under the hood, where Euro6d engines were installed. It offers gasoline and turbodiesel versions, with outputs ranging from 115 hp up to 178 hp, depending on the market. Standard gearboxes are 6-speed manuals and a 6-speed automatic with paddle shifters is offered as an option. A new, 7-speed DCT (dual-clutch) gearbox was available for the facelifted version, but only for the diesel units.

After it was released as a facelift, sales didn’t go well and the vehicle was withdrawn from several markets, including Australia and U.K. For the sedan version, the Sonata took the market share from the i40. 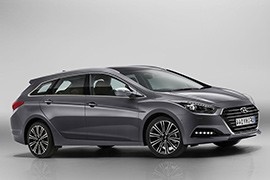