In 2004, Hyundai introduced the first generation of its compact-segment SUV, the Tucson.
By 2020, it reached its fourth generation, which it unveiled in September 2020.

Hyundai introduced the U.S. version of the Tucson in early November 2020 as a 2022 model year. It offered it only with the long-wheelbase version, which was longer, wider, and taller than its predecessor. It also offered some other market-specific features such as the XM Satellite Radio or the fenders’ brake-lights.

The 2022 Hyundai Tucson looked more like an SUV coupe than a regular, compact-sized, cross-over vehicle. Its huge grille at the front featured a 3-D design and headlights that showed like those found on some concept-cars. But it was a production model. The front bumper featured two wide scoops on the outer sides and a smaller grille on the apron’s bottom.

Inside, Hyundai struggled to offer more for its customers. The flat and low dashboard followed a minimalist design, with a grille-like line placed on its upper side. It was a unique design on the market due to its TFT display for the instrument cluster and the 10.25” full touch-screen on the center stack. The Tucson offered a futuristic look for its time, even though most customers from various brands preferred normal buttons and knobs instead of touch-buttons. Thanks to its longer wheelbase, the U.S. version of the Korean SUV provided more legroom for the rear passengers. 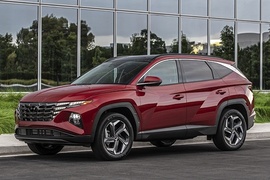