Placed between the Elantra and Sonata, the Hyundai Mistra was conceived as a premium-compact car for the Chinese market.
It was launched in 2013 at the Shanghai Auto Show as a 2014 model year. On the outside, the Mistra was 4.7 m (15.4 ft) long, which is very close to the European Hyundai i40. Hyundai describes the Mistra’s exterior design theme as “grand”, consisting of “modern simplicity, understated sportiness, and smart luxury”, and the Frost Jade paintwork apparently reflects the preference of Chinese customers.

It is built on the same Hyundai-KiaY6 platform with the i40, but with fewer engine variants. To emphasize the premium look and feel, it was fitted with real wood and metal. Full leather seats and other luxury items were available, so the car could get a grip on the Chinese premium market. The 2.7 m (9 ft) long wheelbase made it a spacious sedan.

Under the hood, Hyundai installed three gasoline engines with a displacement of 1.6 liters, 1.8 liters, and 2.0 lites, respectively. The power output ranged between 141 hp and 155 hp. It was available with a choice of transmissions consisting of a 6-speed manual and automatic, or a 7-speed double-clutch for the top-spec version. The performance of the top-spec version is reasonable, with a 195 kph (121 mph) top speed. The Mistra’s suspension is an all-wheel independent type, well balanced for comfort. 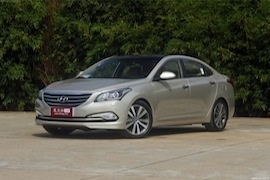