Hyundai made a bold step in the big MPV market with the introduction of the Staria, an up to 11 seat van created to offer comfortable rides for families or businesses purposes.
The Korean carmaker experience on the minivan market was not very high since most of its vehicles from that segment were previously developed by other carmakers, such as Mitsubishi or Mercedes-Benz (for the H350). But times have changed, and Hyundai started to get a slice from the premium carmakers, and the 2022 Staria aimed directly at luxurious minivans or VIP shuttle busses.

Its exterior looked like it was a concept car. Yet, it wasn’t. Hyundai’s design team came with the idea of a dropped window line that descended behind the A-pillars and continued all the way to the D-pillar. Its massive glass area as opposed to the carmakers’ trend that created smaller windows. At the front, the big, grid-like lower bumper area suggested that Hyundai could add both hybrid and electric versions later on.

Inside, Hyundai made room for up to 11 seats, but those arrangements will be available only in selected regions. In Europe, the regular driver’s license allowed up to nine passengers, including the driver. For the nine-seat version, the Korean carmaker installed three rows with two seats and a bench for three in the back. The second row’s seats could swivel 180 degrees.
With a cab-forward design, the dashboard featured a minimalist design, with only a display for the instrument cluster and a touch-screen for the infotainment system to stand apart from the rest of the lines. 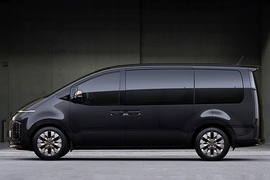