The Jaguar XJ575 was not the smoothest car to be chauffeured in, but it was way more subtle than an S-Class AMG or an Audi S8.
Jaguar introduced the 575 version for the XJ in 2017 as a 2018 model year, and it was more than just the regular limo that could take the owner from A to B. Depending on the customers” options, the car could have been looked subtle or not, but regardless of that, it was fast. Very fast, actually!

Unlike the rest of the XJ range, the XJR575 featured a different bumper with a lower apron and a big, black-mesh grille. The Jaguar badge was red as a reminder that it was not just a regular version. Regardless of thecar’ss color, the vents on the hood betrayed thecar’ss supercharged engine under the hood. For the headlights, the British carmaker its J-signature LED daytime running lights.

Inside, the car featured a different interior than the rest of the XJ range. It was still luxurious, but the high-bolstered front bucket seats sported a diamond-quilted leather upholstery. There were plenty of 575 red badges in the car to remind the occupants what the car was. A 1” touch-screen monitor was placed on the center stack and controlled various car functions, including the climate controls, the navigation, or the sound system. In the long-wheelbase version, the XJ575 offered more than one meter (3 ft) of legroom.

The five-liter supercharged engine produced 575 hp, and Jaguar paired it with an eight-speed automatic gearbox. It sent all the power to the rear wheels. Thanks to that setup, the car could rocket from zero to 60 mph (0-97 kph) in 4.2 seconds. Unlike most German fast premium sedans, it could go up to 186 mph (299 kph). 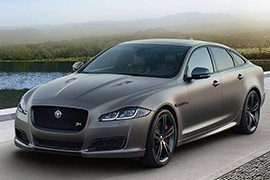