Jeep introduced a significant facelift for the Compass range in 2021 and added more technology to a vehicle that could feel at home either in a parking lot or in front of a lodge in the mountains.
The second generation of the Compass debuted in 2016 in Brazil and, later on, at the Los Angeles International Auto Show. Fast forward to early 2021, and the car had to go through a major refresh. There were new emission regulations and new standards to achieve, and the Compass received a mid-life cycle refresh.

Even though it still sported the seven vertical slats on the grille, the 2021 version (launched as a 2022 model year) was more of an urban SUV than a hard-core off-roader. The car sported a new front bumper with integrated fog lights on the sides, extended towards the car’s center with broad lines. Its headlights were narrower and featured LED daytime running lights at their top. From the sides, the profile remained similar but with a floating-roof design enhanced by the C-pillar’s look.

Inside, it was a major refresh. The carmaker installed a 10.25” instrument cluster in front of the driver instead of classic, analog dials. On top of the center stack, mounted on the dashboard, Jeep placed the infotainment’s system screen available with either an 8.4” or a 10.1” size. It was Android-based and offered wireless connection with either Android Auto or Apple CarPlay. Depending on the trim option, it offered a leather-clad interior or cloth upholstery.

Under the hood, the 2021 Jeep Compass featured a range of gasoline, diesel, or hybrid powertrains. It was ranged between 130 hp and a respectable 240 hp for the top version. They were paired to either a six-speed manual or a six-speed automatic (Dual Clutch) gearbox. 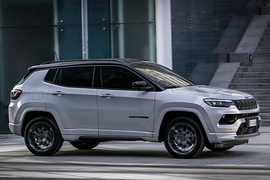