Kia was known for building cheap and reliable cars. Only the idea that the Korean brand could produce a luxury vehicle was considered a joke. But the Asian car-manufacturer didn’t care about the jokes and marched its way toward the top of the sales and squeezed its cars between other car-makers. The main pillars of its evolution were design and reliability. The performances didn’t matter too much. But the Cadenza came and changed perceptions.

With aggressive styling and Peter Schreyer panel, the second generation of the Cadenza appeared with narrow headlights and the “tiger-nose” grille design. The ascending beltline completed the sporty image of the car that could claim a spot in the sports sedan market. The 18” light-alloy wheels were standard-fit, while a set of 19” was offered as an option.

Inside, the technology was at the same level as other car manufacturers. It included an infotainment unit that was compatible with Android Auto and Apple CarPlay. The interior room was high and it offered high-quality materials. The instrument cluster featured a mix of analog dials and LCD display.

Under the hood, the Cadenza featured a 3.3-liter V6 engine mated to an in-house developed 8-speed automatic transmission. 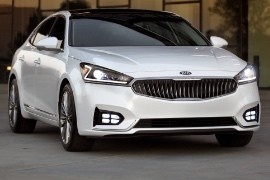