Kia followed the downsizing trend on the third generation of the Rondo and offered it on specific markets with smaller, fuel-efficient engines.
The new generation replaced both the Sedona and the Rondo and showed a styling that matched the Kia lineup “tiger-nose” signature grille. While the MPV segment was shrinking, there were still enough buyers to convince a few carmakers to build a small or compact-sized MPV in a world dominated by crossovers and SUVs.

At the front, the angular headlights swept back to the sides resembled the ones found on the Kia cee’d. The entire car looked like an oversized cee’d, with a taller greenhouse. That led to a steep hood that tried to connect to the raked windshield. The taillights showed a similar shape to those installed on the compact hatchback cee’d.

But most people are buying seven-seat vehicles for their interiors. In that aspect, the Kia significantly improved the Carens. It offered plenty of headroom and legroom for the front and middle-row passengers. Five people could sit inside without any worries, but those two flat-folding seats in the back were too cramped to be used for more than a five-minute drive. One of the car’s great improvements was the special storage bins with covers under the rear passenger’s feet or under the trunk’s floor.

Under the hood, Kia offered the Rondo with a small engine range. While the Canadians could only choose the gasoline units, the Rondo was available for the Australian market with a turbo-diesel version as well. 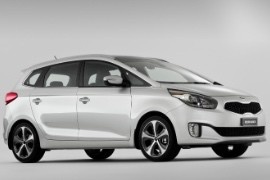