2016 marked 100 years since the birth of Ferrucio Lamborghini.
To mark the milestone, Lamborghini built the Centenario supercar, to honor the brand’s founder. Only 40 vehicles were made, from which 20 were roadsters. They shared the same platform but with the modifications needed accordingly to the bodywork type.

The design team received a green-light from Stephen Winkelmann, President and CEO of Lamborghini to create a unique bodywork. The result is so weird that it looks like a sort of stealth fighter with very short wings.

The aerodynamic is extreme in this car, but everything is built for a purpose. The huge front splitter with air-intakes is channeling the air over the windshield and on sides. The side-boards are canceling the ground-effect. Underbody protection ensures laminar airflow. The rear splitter has the role to direct the air from underneath the car and deflect-it seamlessly to the back. The big electronically controlled wing creates massive downforce when extended. 180% more than when it is retracted.

The Centenario Roadster features an all-wheel-steering system, a Lamborghini first! The all-wheel-drive supercar steers in the opposite direction to the front wheels at speeds under 60 kph (45 mph) and in the same direction up to 3 degrees. Above 45 mph, the rear wheels turn in phase with the front wheels by 1.5 degrees

A 7-speed automated single-clutch gearbox is mounted on the vehicle. The driver also can change the gears manually, via two big carbon-fiber paddle shifters behind the steering wheel. 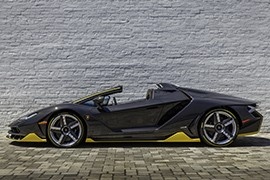