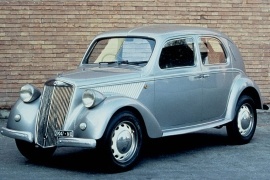 Born before WWII, the Ardea was the smallest sibling of the Lancia Aprilia.
It was built in four series, and the second started right after the war ended. The Italians knew that they have to hurry.

While in some parts of Italy the ruins were still smoking and the cars were still a rare view on the roads, the workers returned to the Lancia factory, cleaned their tools, and started the production again. Lancia had to be reborn. And they did it with pre-war models and the Ardea was a perfect car for a ruined country.

The Ardea was ideal for those moments in history. Short, but with four doors, easy to run, and with body-on-frame construction, it was fit to run on unpaved or damaged roads. The headlights were mounted on the front fenders and, due to a new electrical system, allowing a better view during nights. The sloped back covered a decently-sized trunk, which was opened from the top side. On the rear panels, behind the doors, there was a side-indicator that was extended outwards when changing direction.

To access the interior, the car featured four doors. The rear ones were rear-hinged (suicidal doors) and there was no B-pillar. The metallic dashboard was simple, with a few rounded dials. As a styling cue, the steering wheel featured a three-spoke T-letter design. In the sloped back, the car featured a trunk with a lid that was opened from its upper side.

Under the short hood, there was a very small V4 engine. It’s under 1-liter displacement that was enough to carry four people. It was mated to a 4-speed manual gearbox. The biggest improvement over the first series was the 12-volt electrical system. 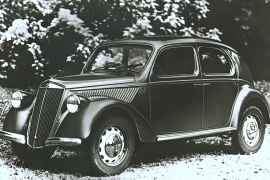 After the economic recession, cars were rare and reserved for the wealthy, but Lancia identified a small niche segment and introduced the Ardea in 1939.
Those were the times when Fiat introduced the Topolino and the Ballila, but both cars were cramped. On the other hand, Lancia offered the Ardea. It was fuel-efficient, large enough for four adults, and even though it didn’t have too much power, it provided superior handling than its main competitors. The Ardea took the sliding-pillar front suspension from the Aprilia, and for cost reasons, the carmaker installed a rigid rear axle with semi-elliptic springs in the back.

Lancia built the Ardea sedans (berlinas) dubbed as Tipo 250, while the extended version used for the Rome Taxi was Tipo 350 and the Tipo 450 rolling chassis. At the front, the tilted grille was just behind the front bumper. The narrow and long engine compartment left the illusion that there was a big engine underneath, even though it wasn’t. With its round headlights and cone-shaped cases, the Ardea looked upmarket. At the back, the carmaker installed the spare wheel and, as an option, a luggage rack mounted over the rear bumper, over the spare wheel.

For easier ingress and egress, Lancia installed four doors without a B-pillar. That solution was unusual but practical, especially for the rear-seat passengers. The dashboard featured a speedometer in the middle and three dials in front of the driver. Lancia made the luggage area behind the rear seats, and it was accessible only from inside the cabin.

Under the long hood, the carmaker installed a 0.9-liter engine V-4 engine, which used a central chain-driven overhead camshaft operating Lancia’s patented valve system, allowing hemispherical combustion chambers paired with a four-speed manual gearbox. After WWII, when Lancia resumed production for civilian cars, the carmaker installed a five-speed manual. It was the first mass-produced five-speed car in the world.