Completely new from the ground up, the 2020 Land Rover Defender has been reimagined for the 21st century approximately three years after the previous generation went out of production and almost eight years after its design was previewed by the DC100 Concept at the 2011 Frankfurt Motor Show.
Unlike the concept car, the new Defender comes in both 90 and 110 versions, both names signifying the different sizes in wheelbase.

The longer-wheelbase Defender 110 is a hell of a lot more luxurious than its predecessor, while the interior space has been increased dramatically. No longer a body-on-frame design, the new model has received a so-called Configurable Terrain Response system, which allows experienced off-roaders to modify individual settings depending on driving conditions. No matter the overall, the 2020 Defender has a ground clearance of up to 291 mm, while the 110 has an approach, breakover and departure angles of 38, 28 and 40 degrees. Its maximum wading depth of 900 mm is also augmented by a new Wade program in the Terrain Response 2 system. The innovative ClearSight Ground View technology can show the driver the area usually hidden by the hood, straight ahead of the front wheels on the central touchscreen inside the cabin. 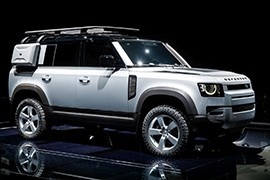