Not long after the Lexus RC made appearance, the company said it will gain a high performance F version, thus the RC F coupe made its appearance at the 2014 North American International Auto Show in Detroit.
Coming with the most aggressive spindle grille design in the lineup and a 5-liter V8 roaring through the twin slanted double-barrel exhausts, the RC F makes for a strong opponents for BMW’s M4.

The RC F takes some design cues front the Lexus LFA, especially the air cooling and aerodynamics. There’s even an active rear wing that deploys after 50 mph.

Inside, the RC F borrows both from the LFA and the IS sedan, coming with a horizontally-designed dashboard, three spoked steering wheel with shortcut buttons, modern-designed sports seats, the new remote touch interface, powerful Mark Levinson audio system and a lot more.

The RC F is also available with the carbon fiber package, which offers a clear coated carbon fiber roof, rear spoiler and even hood on select markets. Safety is also a concern, the RC F coming with 8 airbags by default as well as pre collision systems. 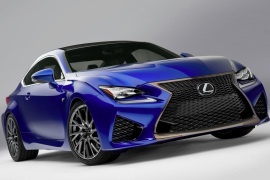