The facelift for the Lexus RC was shown to the public in 2018 at the Paris Motor Show.
It brought upgrades for luxury coupe made by the Japanese car-maker.

It was built to compete against the main German coupe vehicles on a mixed platform, which gathered together the front of a Lexus GS, the mid-section of a Lexus IS of the second generation and the rear of the Lexus IS from the third generation. It was high-tech and with hybrids engines that could achieve very good city mileage due to the brand’s experience into this type of engines,

Lexus tried to maintain the RC’s dynamic coupe proportions while adding more elegance to its exterior. The new front bumper design and the new grille that was transformed from the upper section to the bottom were new design elements. Optional triple LED headlights were added for more refinement. Depending on the trim level and engine version, the car was fitted with 19” light-alloy-wheels.

Inside, there were few new modifications where a new, dark gray streamline treatment has been applied to the heater control panel and audio panel, while enlarged knee pads have been raised to create a heightened sense of space. The sport bucket-seats were highly bolstered for better support while cornering. The infotainment system was installed far on the dashboard, beyond the reach. It could have been controlled via a touch-pad from the center console. 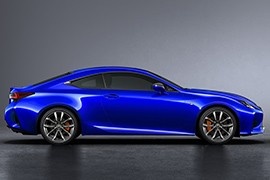