The British car-manufacturer Lotus has revealed a new supercar built for the public roads but with even greater abilities on the track: the Evora GT.
Lotus was always connected to the high-performance and nimble cars. For a long time, it wasn’t that important on the market anymore, until it revealed the Elise, the car that changed everything. Its basic principles of light vehicle and powerful engines worked very well, especially for those who were heading down the racetrack for weekend races.

Based on the already known Lotus Evora, the GT version was introduced in 2019 as a 2020 model. The GT was based on the Evora 4. First of all, the GT is lighter than the 400. One of the reasons is that it was available with 2, or 2+2 seating configuration. An expensive Carbon Pack was included on the options list and that shaved up to 100 lbs (45 kg) from the vehicle weight. The new carbon-fiber body panels also added aerodynamic downforce for improved high-speed cornering grip.

Inside, the GT letters are embroiled in the seatbacks just to remember that it was the GT version. On the center console, in front of the gear-stick, there were the climate control rotary knobs that looked like those used for radio-communication in a race-car. In the middle of the dashboard, an Alpine infotainment unit with Apple CarPlay and Android Auto connectivity was installed.

The engine was the same supercharged 3.5-liter from Toyota that was installed on the Evora 400. It was tweaked to produce more power. The transmission was made via a 6-speed manual gearbox and a Torsen limited-slip differential. 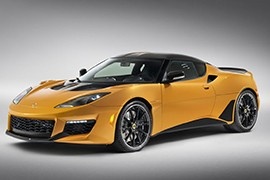