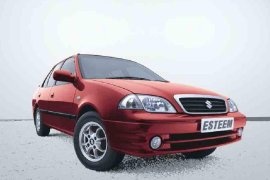 Maruti Udyog built the Maruti 1000 under Suzuki license in 1990, but in 1995 it showed up with a heavily restyled model, which also changed the nameplate from 1000 to Esteem.
Due to the high import taxes for cars in the Indian market, Suzuki signed an agreement with the local producer Maruti Udyog and formed the Maruti Suzuki. Thus, the newly formed company was able to produce and sell more vehicles on the Indian market. The Maruti 1000 was a three-box sedan version of the Suzuki Swift/Cultus/Holden Barina, but even the stereo was on the options list.

In 1995, Maruti introduced the Esteem nameplate. Even though it was based on the same platform and carried over some of the 1000 body panels, it featured new headlights with clear turn signals. Its wider grille sported a chromed surrounding, while the wrapped-around front bumper got a pair of fog lights and a broad lower grille. At the back, the carmaker kept only the corner-mounted taillights and removed the lamps from the trunk lid.

The interior was refreshed and received a new upholstery. Also, it featured power windows and locks and a CD stereo. An AC unit was on the options list. Maruti installed thin front seats and low-mounted to provide enough headroom since the car’s greenhouse wasn’t tall. In the back, the carmaker offered room for three, with a folding center armrest.

Under the hood, the Maruti Esteem received a 1.3-liter engine which provided 85 hp, instead of the previously used 1.0-liter unit with 46 hp.