To avoid India’s high import taxes, Suzuki signed an agreement with the local carmaker Maruti and introduced the Gipsy model in 1985.
The Indian government established the Maruti Udyog Ltd. In 1981 and, in the next year, it signed a contract with Suzuki to build cars in India. There was a high demand for cheap, sturdy, and trustworthy vehicles, and that’s what the Japanese carmaker introduced on the assembly lines in 1985: the Maruti Suzuki Gipsy. It was a win-win situation, where the country started to build specific vehicles, and the Japanese carmaker started to make a profit from that.

The Gipsy was entirely based on the Suzuki SJ-410, but with a very small difference: it sported the Maruti badge at the front. The round headlights and the black grille remained. Since the car had to be cheap and it was already a body-on-frame construction. The car was built on the long-wheelbase version and sported two doors and a canvas roof.

Inside, apart from the Maruti badge on the steering wheel, the carmaker carried over everything else from the light Suzuki SJ. Apart from the two front seats, the car sported side benches in the car’s rear side, where four other people could sit.

Suzuki offered the Gipsy with a 1.0-liter engine paired to a four-speed manual. A transfer case with high and low gear was fitted as standard. 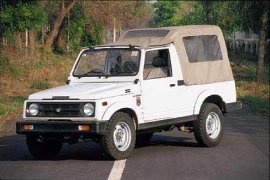