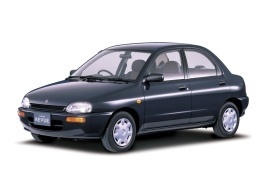 The third generation of the Mazda 121 was conceived as a city car vehicle, in the shape of a small three-box sedan.
It was a big departure from the boxy hatchback of the second generation.

From the outside, the rounded vehicle with a low waistline and a high roof made the car look like a hat. It was at the beginning of the biodesign era when all the shapes were rounded and you would be punished, as a designer, if you would draw a straight line on a car. The small, 13” didn’t help too much on the car’s image. The body-colored plastic bumpers were a good addition.

Inside, there was a very roomy interior for four adult passengers. Both the knee and the headroom were surprisingly big for a Japanese car. In the back, only two passengers could sit comfortably. For the driver, the dashboard was simple, but with a stereo mounted too low on the center stack. The instrument cluster featured white needles on a light-blue background. Unusual for a 1991 city car was that the 121 didn’t have power steering.

There were few engine options for the 121, either with a carburetor or a single-point fuel injection. Depending on the engine and country, the 121 was available with a 4-speed automatic transmission or a 5-speed manual. 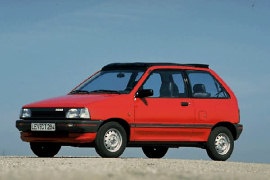 Mazda entered the supermini car-segment with the 121 model in 1987.
It was sold in Australia and unveiled in Europe at the 1988 Geneva Motor Show.

In 1987 Mazda already had some interesting models on the market, and its main contender was the compact hatchback 323. But the Japanese car-maker needed something smaller for the European market. Ford owned a big part of Mazda at that time and it already had the Fiesta on the market. In the end, the Japanese brand had to open its small-segment car-market, and it did it with the 121. Ford also sold the patent for the car to the Kia, which built the Kia Pride.

Small, practical, and cheap, were the main characteristics of the first generation of the Mazda 121. The flat body panels were inexpensive to build and the whole car was designed and engineered for a low price. The 121 featured a canvas roof as an option (top-cabriolet) that made the car more fun in the city.

Inside there were only a few options to choose from, but it featured a stereo and adjustable steering column. The interior was designed with a sliding rear bench so the car could get more trunk space which, otherwise, was almost non-existent.

For the engine, the Mazda 121 offered a 1.3-liter engine in Australia and a 1.1-liter for the European version. Both engine versions were mated to a 4-speed manual transmission.