The third generation of Mazda 6 was launched in 2012 both as a sedan and station wagon.
It stunned the world with its beauty and, in 2016, a mid-life cycle refresh was up on the market.

It is very hard to enhance visually a vehicle that was acclaimed for its look, and the design seemed to look brand new even after 4 years. Mazda had this situation when it had to rejuvenate its top model, the large model 6. But it had to and the most important elements that it changed were under the hood. On the outside, there were few subtle modifications, such as the turn signals from the exterior rearview mirrors. On the facelifted version thee were horizontal instead of vertical. The grille had a 3D pattern, like a mesh with diamonds on it.

Big enhancements were to be found inside the cabin, where the dashboard was more driver-oriented. A head-up display was added to the features, a new steering wheel and better materials were used. Also, a 360 degrees camera system was included in the options list.

A new system was installed in the car, to enhance cornering speed. When cornering, a slight brake is applied on the inside wheels and on the exit the torque sent to the wheels is amplified.
Thus, the car will handle better on bends. It is something that good drivers do: slight brake before the turn and throttle after the apex. But Mazda’s technology is better since it brakes only the inside wheels. Most of the engines and transmissions are carried over from the non-facelift model. 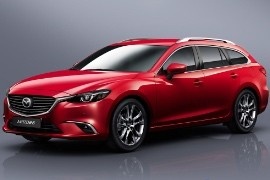