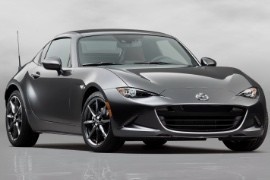 Mazda MX5/Miata was already the best selling roadster ever and, in 2016, it introduced a new body version named RF – Retractable Fastback.
The Japanese carmaker used a British recipe: a small engine in the front, the power went to the rear wheels, and the vehicle was as light as possible. While the Miata’s first-generation tipped the scale lower than one ton, the 2016 version was already heavier due to the introduction of comfort and safety features. At the same time, it kept the four-pot engines under the hood, but with a higher power.

Mazda imagined a new look for its light, nimble roadster. It added a B-pillar and a retractable roof on top of it. When the driver uncovered the car, it wasn’t a true roadster anymore. It was more of a targa. It was as a roadster as a Honda Civic DelSol two decades before it. Unlike the Honda, which featured fixed pillars and a power-operated top, Mazda used a different way to remove the top of the vehicle. But the idea was the same, and, after all, it wasn’t a true roadster anymore.

The car’s interior was the same as the one from the regular rag-top version with high-bolstered Recaro seats. The MX5/Miata offered an instrument cluster with three round dials and a center-mounted tachometer. It created a great view and a race-inspired image for the driver. Due to its high center console, Mazda separated the driver from its front passenger.

Mazda installed its revolutionary 2.0-liter Skyactive engine that offered up to 167 hp, depending on the market under the hood. It was paired to a 6-speed manual or a 6-speed auto. The MX5/Miata RF was a driver-focused vehicle, and the carmaker installed a standard LSD for the drive axle. 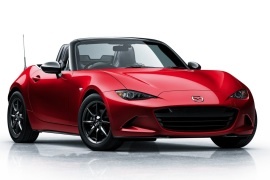 The new-generation Mazda MX-5 / Miata has been unveiled simultaneously in Japan, USA and Europe, coming with both the SYACTIV technology and the KODO-Soul of Motion design language.
Using the SKYACTIV technology, the new MX-5 is now 100 kg lighter, while the front-midship engine is located closer to the cars center in order to achieve a 50:50 weight distribution. It also comes with specially tuned direct-injection gasoline engines as well as new six-speed manual and automatic transmissions.

Designers focused on giving the car beautiful proportions, which are translated through a deeper expression of the KODO design theme. The body surfaces are richly expressing the Japanese sense of contrast between stillness and motion.

The snug cockpit comes with a symmetric geometry, using quality materials and enough features for the vehicle to double as a daily driver. Still, the shapes have been kept simple to let the driver focus on driving and fell the real enjoyment the car is set to provide. 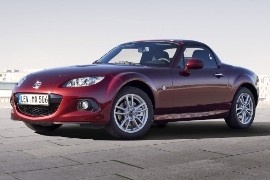 One of the most loved and appreciated roadsters, the facelifted Mazda MX-5 / Miata was unveiled in 2012.
Besides the more aggressive exterior design and more responsive acceleration, pedestrian safety was enhanced to meet the EU standards.

New for 2012, the MX-5 was offered as a hardtop roadster. The new model was also known as the Roadster Coupe. The new version added the comfort of an electrically-operated hard top roof.

Best known for its sharp steering and great handling, the MX-5 was a real pleasure to drive. While it was not very fast, the Miata was more about the experience of driving with the top down on twisty roads.

Inside, the small sports car was a little cramped, thus average-sized drivers could enjoy the Miata better than tall ones. Otherwise, the gauges were easy to read and all controls were well-placed.

Considering pedestrians’ safety, the Miata featured an active hood system that automatically raised the hood during an impact to prevent or diminish the severity of the injuries. The lower section of the front bumper was redesigned to protect people’s legs. 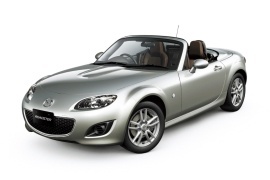 The most sold roadster in the world, Mazda MX5/Miata, received a facelift for its third generation in 2008.
It was the last stint before it was changed in 2015.

Named MX5 in most of the world and Miata on the North American market, the little roadster from Mazda gained popularity due to its light construction, low running cost, and reliability. It was a true daily driver, but with a sporty look and an open top.

The third generation had the NC code name. It was introduced in 2005 and it was the first Miata that featured a retractable hardtop, designed by Webasto in Germany. The front fascia was slightly improved over the non-facelifted version, featuring a new bumper and lower apron. The grille was modified with the five-point grille design, between the redesigned headlights. New triangular fog-lights were installed.

Inside, the NC featured the same interior, which was considerably bigger than on the second generation, the NB. The retractable hard-top, which was introduced in 2006, was kept. It added only 37 kg (81.5 lbs) to the total weight of the car and it was stored behind the seats. The transverse piano black trim from the dashboard was changed to silver.

The car was fitted with a new development of the MZR 2.0-liter engine, which now produced 160 hp. It was mated to a new, 6-speed, manual gearbox, and a 6-speed automatic was on the options list. The 2.0-liter version was fitted with a standard limited-slip differential. 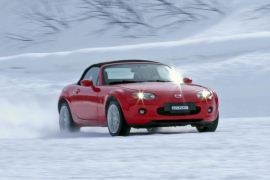 The Mazda MX5/Miata continued its successful road all over the world with the introduction of its third generation in 2005.
When the Japanese car-maker designed the MX5, it took the British roadster as an example, but it made it better. The secret behind the MX5 success was the reliability, which was not common among some British roadsters. On top of that, it was fuel-efficient. It was a fun, daily-driver vehicle.

While the first two generations looked like they didn’t know their place on the market, the third generation came with a firm foot and very sure that it knew where it belongs: everywhere. Maybe it was not the most successful design for the MX5. The headlights were not swept on the sides, and the grille looked too small in the front apron. The molds on the wheel-arches made the car look wider and more muscular. The designers claimed that it wanted to give the vehicle a Sumo-fighter look, even though it was a light car.

The interior was fit for two passengers and offered enough legroom and headroom. The car-maker listened to its customers who complained about headroom on the NB (second generation) MX5/Miata, so it made the car large enough to fit taller drivers. The NB was available as a convertible with a manual canvas top or an electrical retractable hard-top.

The platform was a mix of different vehicles from the Mazda range. The front suspension was carried over from the RX8. A limited-slip differential was available depending on the engine and region. Depending on the market, the MX5 was fitted with a 5- or 6-speed manual. A six-speed automatic was available. 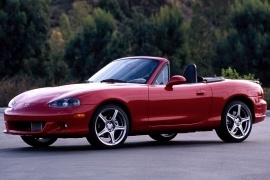 Mazda produced for almost two years a turbocharged version of its well-known MX-5/Miata roadster and tuned-it for road and track use.
The Mazda MX-5/Miata was the best-selling roadster in the world in 2004. It was the first, true, daily driver roadster that could serve as a commuter car thanks to its high fuel efficiency and a fun car thanks to its rear-wheel-drive and low overall weight. The Mazdaspeed version was a different kind of roadster. The carmaker took a standard, second-generation (NB) Miata, put a turbocharger under the hood, and improved the suspension. It wasn’t a Honda S2000 killer, but it could keep up with that on a tight race track. And it only came in red color.

But Mazda couldn’t just let the turbocharged Miata look just like the rest of the range. It added a body kit with different air-intakes in the front apron and no mesh-grille at all. Through the big gap, the car showed its intercooler placed behind the bumper. A set of aerodynamic side-sills channeled the air to the sides to avoid ground-effect turbulences on the sides. In the back, a small lip spoiler enhanced the car’s rear look.

Inside, Mazda continued with some other upgrades, such as the Bose sound system with a CD player. Also, the aluminum pedals sported the Mazdaspeed lettering. A short-shifter kit was added for the gear-stick. The sport bucket seats with integrated headrests promised good lateral support thanks to their bolsterings.

It was a factory-tuned Mazda MX-5/Miata that came in the same year as the “2Fast 2Furious” movie. Under the hood, there was a turbocharged inline-four gasoline engine. Mazdaspeed lowered and stiffened the suspension for better cornering speed and added low-profile tires on 17” Racing Heart alloys. The six-speed manual was standard, but the air-conditioning was on the options list. 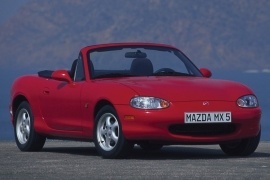 The sporty roadster released In 1989 was improved for 1998 when the second generation Mazda MX5/Miata was released.
Besides the obvious exterior design updates, the new MX-5/Miata had an improved aerodynamic efficiency, as well as more safety features available.

The most notable change was at the front end, where the iconic retractable headlamps were removed and replaced by fixed ones due to pedestrian safety concerns. The update also helped to remove around 5 kg, thus the car’s weight was slightly reduced.

Inside, the new MX-5/Miata featured subtle changes such as a little more sculpted dashboard, as well as the addition of an override switch for the passenger-side airbags, and the availability of a wind blocker.

While the cargo area was not the roomiest, the capacity was slightly improved as the battery was housed between the bumper and the rear wheels.

Another improvement was the addition of a rear glass window with a defroster, while the 1st generation was equipped with a plastic rear window.

The engine powering the second-generation MX-5 Miata was still the 1.8-liter unit that now came with a new cylinder head a new variable intake manifold. Combined, the power was increased from 133 hp to 140 hp, thus the new model reached 100 kph (62 mph) in 8 seconds. 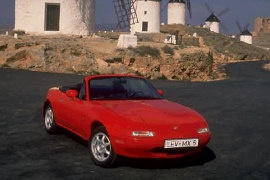 Nobody knew what a huge success the Mazda MX5 will have when the car was launched in 1989.
The little 2-seats roadster was sold in over 400.000 units. And that was only for the first generation of the Mazda MX5 – Miata as it is known in the North-American Continent.

The Mazda MX5 NA, the code-name for the first generation of the Miata, was a simple roadster, built on the idea of a British roadster, but with the Japanese reliability. It was not a fast car, or quick or luxurious. It was a simple, reliable, nimble vehicle that could be driven daily, year after year.

The design was plain and simple, with the grille incorporated into the lower part of the bumper. It looked just like a smiling mouth and, with the pop-up headlights, the front of the car looked like a smiling face.

Inside the cabin, there was room for two passengers, but not so tall. The headroom with the soft top up was limited. The Miata won a lot of customers due to its driving position with the legs almost stretched under the dashboard and low seating position. The instrument cluster had the most important four dials for a sports car: fuel gauge, coolant temperature, tachometer, and speedometer. An interesting sound system for that era was offered as an option for Radio-Cassette-CD Player.