The fourth generation of the A-Class was unveiled in 2018 and it brought new improvements for the compact-premium vehicle, with cleaner engines and new infotainment units.
First two generations of the A-Class were not among the best vehicles made by Mercedes-Benz. With shapes of a scaled-down MPV and front-wheel-drive systems, they didn’t make a good impression on the market and sales figures were low. The third generation though came out as a hatchback and it was well-received by the market.

Mercedes-Benz needed a compact vehicle in its stable. With some help from the French car-maker Renault, it succeeded to build a better platform for the premium-compact car. The basis of a two-box design with better proportions and dimensions led to a better-looking car. The A-pillars were raked to improve the drag coefficient, while the back followed. The vehicle had a wider look at the rear end thanks to a wider greenhouse, which also emphasized the shoulders, and to the wider-spaced rear reflectors in the modular, two-section rear bumper.

Inside, Mercedes-Benz took a completely new approach with a new feeling of spaciousness.
The unique interior architecture is shaped in particular by the avant-garde design of the dashboard: For the first time, a cowl above the cockpit has been completely dispensed with. As a result, the wing-shaped main body of the dashboard extended from one front door to the other with no visual discontinuity. The Widescreen display was completely free-standing. It was available with either two 7” displays, a 7” plus a 10.25” or two 10.25” displays.

The entry-level engine had a 1.33-liter displacement and it was carried-over from Renault, the European big specialist in small engines. It was mated to a 7-speed dual-clutch gearbox and it increased the fuel-efficiency and lowered the CO2 emissions. 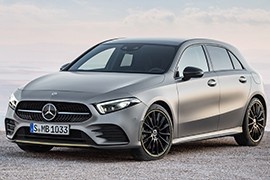