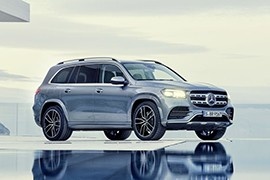 When it comes to full-size SUVs, there is one European brand that can really offer something suitable in this class regarding comfort and this is the Mercedes-Benz GLS.
Big, spacious and with a full load of luxury items inside, the Mercedes-Bens GLS is an “all or nothing” statement. The 2019 generation comes with an increase in the wheelbase of 60 mm (2.36 in) to offer more comfort for the three rows of occupants.

The big seven-seater is offered with loads of technology, starting with the engine and the electrical system, which is based on a 48-volt architecture. This is fed via a belt-driven starter-generator, which helps improve fuel consumption and lower emissions.

The GLS is offered with two gasoline engines for the North-American market, while two turbodiesel engines will be offered for Europe, Russia and other markets. The biggest engine is a gasoline V8 found in the GLS 580 4Matic and it offers 489 HP and 700 Nm (516.3 lb-ft) of torque. The smaller one, an inline-six, in the GLS 450 4Matic, comes with 367 HP and 500 Nm (368.8 lb-ft) of torque. Both variants benefit from the intelligent starter-generator system, which adds 22 HP and 250 Nm (184 lb-ft) of torque for a short period of time.

On the inside, 11.6 in screens are fitted for the rear seats and the latest MBUX infotainment system is available, featuring Apple CarPlay and Android Auto. 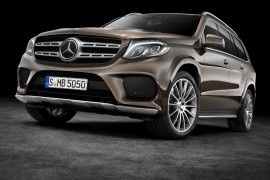 The GL range from the Mercedes-Benz has received the “S” letter at the end, so the customers won’t be confused.
From the manufacturer’s point of view, that was the S-Class of its SUV line-up.

After a few confusion with different badges such as ML and GL, the Mercedes-Benz decided that all of their SUVs had to be named GL and then just add the respective letter according to its class: GLA, GLB, GLC, GLE and, the biggest of all, the GLS. An SUV that looks very big in Europe, but was average size in the U.S.

The GL was the first 7-seat luxury SUV built by the German manufacturer. The big front fascia, wide fenders with flared wheel-arches and long bodywork were the main ingredients of that luxurious SUV. In 2016, the model received some updates at its mid-life cycle refresh. But more than the few in and out improvements, it received the GLS badge instead of the previous GL. When compared to its predecessor, a softer front fascia was noticeable. The headlights and front grille didn’t look as aggressive as before. In the rear, LED taillights were installed.

Inside the cabin, the 2016 GLS featured a newly designed multifunction steering wheel with three spokes. The infotainment unit was equipped with an 8” monitor installed in the center console. The new system featured an optional COMMAND online and a touch-pad.

Under the hood, the engines received some updates and more power. For the suspension, a new AIRMATIC air-suspension system was installed and allowed a ground clearance up to 306 mm (12.5”).