The SL-Class received an important update in 2016 when the 65 AMG was introduced to the market.
It offered a thrilling performance and exclusive luxury. It was a true, open-top, GT car.

After Mercedes-Benz started to build the 7G-Tronic automatic gearbox, it was difficult to install more powerful engines on its cars. The previously used 5G-Tronic was able to cope with up to 1000 Nm (737 lb-ft) of torque, while the new 7-speed was not. Further improvements led to the AMG Speedshift MCT 7, which was able to deliver the desired performance. The rest of the SL-range was fitted with the 9G-Tronic gearbox.

The 2016 SL 65 featured an upright grille and all-LED headlights. Some AMG treatment was noticeable at the front bumper and the side sills. A small spoiler on the trunk was included in the aerodynamic package. The SL65 was fitted as standard with multi-spoke ceramic polished forged wheels.

Inside, the two-seat roadster featured sport-bucket seats with high bolstering. The airscarf system, that blows hot air behind the occupant’s necks, was standard. For the driver, the SL 65 AMG offered a three-spoke steering wheel.

For better handling, the AMG engineers didn’t cut any corners. The car was fitted with adaptive suspension, based on the Active Body Control system. The rear self-locking differential was included on the menu to help to launch the car. As expected, the double-clutch gearbox offered the option for launch control. 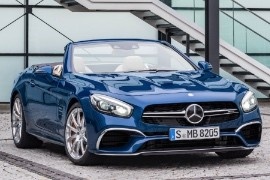