Mercedes-Benz introduced the Type 230 as a long-wheelbase Type 200 and evolved into one of the most successful ranges before WWII, and the Cabriolet D had unique merit for that.
Just a year after the W143 Series was introduced, Daimler-Benz came with a facelifted version for the entire lineup. That brought a slightly modified pinned-out radiator, and new headlights mounted directly on the front fenders. Along with that, it introduced a four-door, long-wheelbase version of the open-top Type 230, which allowed a comfortable ingress and egress from the vehicle, especially with the top down, for all passengers.

The German carmaker was not at its first four-door open-top vehicle, and its customers awaited that version. While most of the convertibles built by Mercedes-Benz featured two doors and four or five seats, the D-version was offered with four doors. The front-ones were rear-hinged while the rear ones were hinged-forward. Thus, the front occupants had an easier way to step out of the car. Also, that system allowed the driver to quickly step down and open the door for the rear occupants.

Inside, the 230 Cabriolet D was very spacious due to its long wheelbase. The carmaker made a quick-release system for the B-pillar, thus allowing the users to have a completely open area after the windshield.

Under the hood, the German carmaker installed an inline-six engine with a 2.3-liter displacement, hence the car’s name, that provided 55 hp. It was paired to a synchromesh four-speed manual gearbox with direct-drive for the fourth gear. Mercedes-Benz installed a wider track both front and rear and an independent suspension with leaf-springs in all corners to provide more comfort and a better cornering speed. 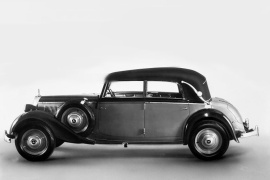