Mercedes-Benz replaced the Typ 290 in 1937 when it revealed the new Typ 320 lineup, which offered a better power-to-weight ratio and extensive bodywork choice.
Like the 290, the 320 was available with two wheelbases and a few shapes, or just as a bare chassis. Apart from the sedan and two-door convertible, the carmaker offered a four-door convertible with removable side windows.

Thanks to its long wheelbase of 3.3 m (130”), the Tourenwagen featured a long engine compartment with a pair of spare wheels mounted on its sides. The headlights were enclosed in more spherical housings, attached directly to the front fenders on cast legs. When the driver completely opened it, the car resembled the torpedo-style vehicles from the ’20s, with the removable roof folded behind the cabin. Its shorter rear fenders cleared the path for the back door, easing up the ingress and egress for the back-seat passengers. For the same reason, the carmaker installed a set of side steps between the front and rear fenders.

Mercedes-Benz placed two leather-clad benches in the car for up to five occupants. The front one was wide enough for three adults, but the floor-mounted gear stick prevented a third middle passenger. A significant improvement for the car was adding a coolant-temperature gauge. The carmaker mounted it on the instrument panel next to the speedometer and tachometer. 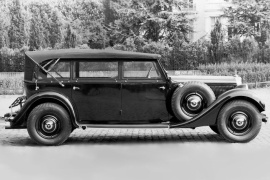