In October 1936, Mercedes-Benz launched the 540K at the Paris Motor Show.
It was an important upgrade over the 500 K Series, which was already on sale since 1934.

The performance-oriented customers considered the Mercedes-Benz 380 underpowered in certain circumstances and, in 1934, the German car-maker decided to introduce a newly developed chassis: the 500 K. It was offered in various bodyworks, including a bare-bone chassis to be completed by various custom body makers such as Spohn. But for the Sport-Limousine vehicles, the customers had to wait until 1936 when their wait was rewarded with the new, top-of-the-line, 540 K Sport Limousine “Spezial”.

It was more of a coupe vehicle, based on the regular chassis of the W29 model range. The inline-eight supercharged engine imposed a long hood with side exhausts. The short greenhouse was continued with the sloped rear end, in a streamlined fashion. Also, to enhance the aerodynamic, the rear wheels were covered with removable panels that could have been removed to change the wheels when needed.

Inside, there was room for two passengers. The flat seats were covered in leather, adding a touch of luxury to the expensive vehicle. The instrument panel was placed in the middle of the dashboard, with five round dials in chromed rings.

The engine was a 5.4-liter unit, which was obtained after an increase in bore and stroke of the 500 K engine. With the help of a Roots supercharger, the car was able to achieve high speeds, especially on the German highways, known as Autobahn. 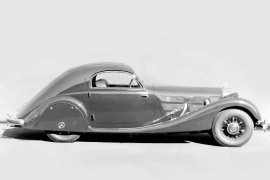