Rolling on the wave of the first generation’s success, the second Mercedes-AMG A 45 had some pretty big shoes to fill and it looks like it has managed to do it, and then some.
While the first A45 had 381 Ps in its facelifted version, the base version of the second one delivers no less than 387 PS. On top of it, there’s also an A 45 S version now, which has a monstrous 421 PS output from a similar 2.0-liter engine.

Apart from the massive increase in output, the main novelty with the second generation is the so-called “Drift Mode,” which is standard on the A 45 S and optional on the base model. Unlike other FWD-based all-wheel-drive systems, the one in the second-generation A 45 uses two electronically controlled multi-disc clutches on the rear axle. This way, the torque is not only variably distributed between the front and rear axles, but also selectively between the left and right rear wheels, meaning that you can now powerslide an A 45 like one of its RWD-based bigger brothers. 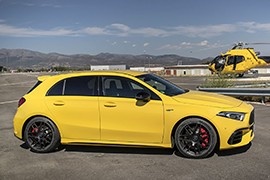