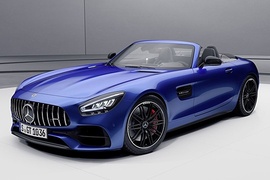 While the AMG GT Coupe was more of a daily-driver supercar, its open-top brother was more of a GT with high performances.
In 2014, AMG launched its first product that was named AMG instead of Mercedes-Benz AMG. It was a car like no other in the Mercedes-Benz manufacturer lineup. The supercar was offered with the most powerful naturally aspirated engine on the market at its launch. In 2016 came the first facelift and the convertible version, and four years later, a new refresh for the lineup was introduced.

The 2020 model featured some exterior changes to enhance the look and the car’s aerodynamic. The full-LED headlights became a standard feature, and a new grille design was installed. The front bumper was divided into three main areas: the lower grille and the side-intakes. The latter was split in two by a horizontal slat. The car’s back was slightly improved, but the four exhaust pipes were left visible, poking out through the rear apron.

The interior featured a carbon-fiber trim on the center console and the dashboard. The instrument cluster was entirely digital, with a 12.3” TFT color-display. An additional screen was placed on top of the center stack for the infotainment system. It was controlled via voice commands, a touch-pad, or via the 10.3” touch-screen. The Apple CarPlay and the Android Auto integration was fitted as standard.

The 2020 AMG GT featured a twin-turbo V8 engine that offered 469 hp. The GT C variant received 550 hp, and the top-spec GT R and GT R Pro received the 577 hp unit. All versions were paired to a 7-speed, dual-clutch, automatic transmission. Power went to the rear wheels, and the gearbox was mounted in the back. 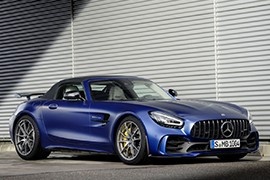 Aiming to combine the style of the GT Roadster with the performance of the track-ready GT R, the Mercedes-AMG GT R Roadster is a special edition model that will be limited to just 750 units.
The model was unveiled at teh same time as the most profound refresh of the Mercedes-AMG GT lineup and is the quickest open top Mercedes model this side of the also-limited Mercedes-Benz CLK GTR Roadster.

Part of the second mid-cycle facelift of the Mercedes-AMG GT range, the 2019 GT R has received a number of exterior and interior refreshes that should keep the model up to date for a few more years despite increased competition from Porsche, its main rival in this segment.

The front-end now features all-new interior graphics for the LED headlights, which emulate those on the Mercedes-AMG GT 4-door Coupe, thus enhancing the family connection between all the GT models. An arched light guide functions as a daytime running light, a navigation light and as a turn signal at the same time. On the inside, there’s a new steering wheel that’s taken straight out of the GT 4-door Coupe, and it includes the two Touch Control buttons that can be used to control an all-new digital display and the center display. 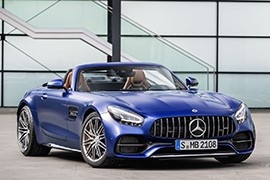 After it launched the AMG GT, its marketing department thought that it would be a good idea to chop the roof and make it a roadster.
But not just any roadster. So they made it look mean. This is the 2018 AMG GT C Roadster.

It is wider than the GT S and with the 2018 updates, it has the AMG DYNAMICS integrated driving control system for added agility. The rear wheel arches are wider and new side-sills appeared to create a nicer side look. The soft-top is going down electrically in less than 12 seconds at speeds of up to 48 kph (30 mph).

On the AMG GT C the steering wheel comes standard with a rim in black Nappa leather / DINAMICA microfiber. It’s all about the grip on the fast curves. As in the AMG GT 4-Door Coupe, the new telematics architecture in the two-door AMG GT models makes the innovative, standard fully digital instrument display with a 12.3-inch instrument cluster and a 10.25-inch multimedia display on the center console possible. The instrument cluster offers a new screen design with the three styles “Classic,” “Sporty” or “Supersport.”

Both seats are benefiting from the Airscarf feature that blows warm air from behind the backseat, to the neck area, so the occupants will not suffer some sort of sour after a relaxed (or fast) drive. One thing it is hard to understand is why did it have 6 air-vents in the dashboard? They are spoiling the look. 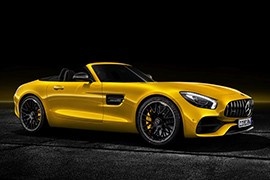 Mercedes-AMG engineers worked around the clock to refresh the S-version for the GT lineup in both shapes, the coupe, and the roadster, and the result was unveiled in 2018.
After creating the SLS supercar, the German carmaker introduced the GT model as a true Grand Tourer. But it wasn’t just about long relaxing drives, especially in the S-version. The rag-top version was a true roadster, able to keep up with the most powerful supercars on the market but still offered a touch of luxury.

At the front, the carmaker re-designed the Panamericana grille with vertical slats. It was inspired by the original Mercedes-Benz “Gullwing” from the ’50s, just shinier. AMG installed an active aerodynamic system at the bottom of the bumper to help heat up or cool the radiator. On the side, a pair of big vents extracted the hot air from the engine bay. Its canvas-roof was fully retractable behind the seats, at the touch of a button.

Inside, the big center console kept that special design with eight buttons installed on a large V-shaped design. Of course, it corresponded to the V8 engine idea. The carmaker offered an Artico man-made leather/Dinamica microfiber as standard, while Nappa leather was on the options list. A set of AMG Performance, high-bolstered seats were available at extra costs. All S-versions featured a standard Silver Chrome interior package. 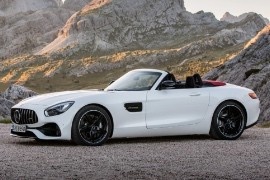 The convertible version of the Mercedes-AMG GT arrived in 2016 under the GT Roadster name.
The new car takes its lead from the top AMG GT R sportscar where muscular proportions are concerned - the wider rear wings create space for a wider track and wider wheels, allowing even higher cornering speeds and best traction. A variable performance exhaust system also ensures an authentic V8 sound while the seven-speed dual clutch transmission in a transaxle arrangement comes in for precision shifting and perfect weight distribution. The 2017 Mercedes-AMG GT Roadster also comes with an active air management system using vertical louvers in the front air intakes. 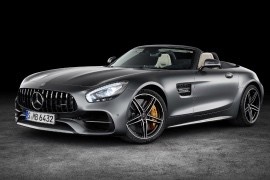 In 2016, Mercedes-AMG improved its roadster lineup with a version that sat between the base GT and the top performer GT R.
When Mercedes-Benz decided to transform the AMG into a separate brand, it allowed it to make different models, which didn’t have any shape in common with other Mercedes vehicles. The first model introduced under the new brand was the SLS AMG in 2010, while the GT made its appearance in 2014 at the Paris Motor Show. The carmaker improved it and, in 2016, it came with the GT C and GT C Roadster.

Mercedes-AMG unveiled both vehicles in October at the Paris Motor Show. The roadster sported a Panamericana grille with vertical slats and an oversized front bumper that sported an A-shaped lower grille and a pair of side-pods. The carmaker installed a set of vents that extracted the air from the front wheel-wells on the front fenders. Its retractable roof was power-operated, and the driver could open or close the car at speed up to 50 kph (35 mph).

Inside, Mercedes-AMG was a mix of luxury and sport-inspired elements. Its sport-bucket seats with high bolstering. Their integrated headrests featured AirScarf function that blew warm air into the occupant’s necks. The satin aluminum trims covered the top of the center console. There were eight buttons for various vehicle settings, including the start/stop button, which was marked with red letterings.