Based on the same shape and size as its gasoline-powered cousin, the ZS, the EV version shows a new approach to the market, following the EV trend.
The 2021 ZS EV came when a world pandemic and a chip-shortage issue affected all the carmakers. Yet, the Chinese carmaker who owned the once-famous British brand found a way to attract new buyers. While the previous version of the ZS EV featured a smaller battery pack, the 2021 model featured a larger one as an option. Also, it came with new clothing.

Unlike its predecessor, the 2021 model featured a body-colored front fascia, which lost its mesh-grille design from the gasoline-powered version. The carmaker’s designers didn’t struggle too much with that, and it mostly looked like a panel with drilled holes in it rather than a true grille meant for cooling. It hid just the charging port, which was placed behind the chromed MG badge. Its LED headlights featured an angular shape with sharp corners and a rounded lower area. Somehow, they resembled the lamps installed on other vehicles. From its sides, the 17” light-alloy wheels showed a five-spoke design.

Inside, the MG ZS EV featured an interior similar to those found on the gasoline-powered version. Yet, the center console looked simpler since it didn’t have the gear stick on it. There, the carmaker placed the rotary button for the driving programs (PRND) and a few switches for driving modes, energy recuperation, and battery status. Since it was one of the cheapest cars in its class, the carmaker couldn’t afford to install expensive materials. 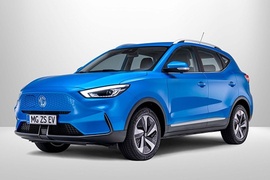