The 2012 MINI Clubvan was one of the rarest MINI ever made.
It was designed for those who needed a van but in a more exquisite form. It might be called a “premium, small-class, utility van”.

The Clubvan was unveiled as a Concept Car at 2012 Geneva Motor Show and the pre-series model showed up at the Goodwood Festival of Speed in the same year. Production models started in late 2012 and further models were produced in 2013. After only 50 models have been sold in the U.S., the car was axed from the production line.

The Clubvan was a Clubman with vinyl wraps over its side windows and plastic covers inside to protect the glass for breaking. It was the cheapest production method for the Clubvan, a vehicle that was actually a converted Clubman. It even kept the side rear small door, but it was useless. It was there just to ease the production line. Moreover, the interior rear grab-handles, which were useful for rear passengers, were kept in place. The front seats retained the folding mechanism that was used to allow access for the rear seats.

The instrument cluster and the dashboard were the same as in any other MINI Clubman. The car was ideal especially for MINI service-shops and for luxury deliveries since its price was particularly high.

Back in the ’50s, an economic debate between Europe and the U.S. led to an increase in taxation for the chickens imported in Europe from the U.S. In retaliation, the U.S. Government imposed a 25% tax for imported utility vans and pickups from Europe. That law was still in existence in 2013 and thus, the MINI Clubvan was more expensive than a MINI Clubman, and from most of the vans. 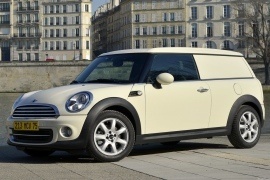