First launched under the form of two concept cars (Concept-X at the 39th edition of the Tokyo Motor Show and Prototype-X at the 2007 North American International Auto Show), the tenth generation Mitsubishi Lancer Evolution arrived in autumn 2007, with sales starting in the next few months.
Despite the fact that power of the new Lancer Evolution depend on their target market, each model develops at least 280 HP.

Apart from a sharper styling and a wide trapezoidal new grille, the 2008 Lancer Evolution X comes with a new 2-liter turbocharged engine mated to either a 5-speed manual or 6-speed sequential semi-automatic gearbox. The body gained more stiffness to aid with handling and reduce vibrations, while a wider track and longer wheelbase also help with the cause while offering more room for passengers. 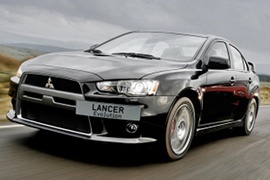