Mitsubishi worked together with the Italian design company Pininfarina to develop and produce the Pajero Pinin, also known as Shogun Pinin, IO, or just Pinin.
The first Pinin rolled out from the assembly line in Japan in 1998, while the first European-built vehicle came out from Italy in late 1999. Mitsubishi noticed the rising demand for small SUVs and, considering its experience in building 4x4 and AWD vehicles, and couldn’t stay aside.

It might not be the best project that came out from the Pininfarina design studios, but worth mentioning that the talks between the two companies started in 1996, it was signed in 1997, and the car was unveiled at the 1999 Geneva Motor Show. It looked like a shrunk second-generation Pajero/Montero. With its small segment sizes, it could fit almost everywhere. Its short cabin didn’t allow the carmaker to install the spare wheel inside or under the vehicle and mounted it on the rear door, which was side-hinged.

The interior didn’t look like Pininfarina made it. The boxy design with flat panels looked similar to those from other off-road vehicles built by Mitsubishi. Due to the short wheelbase, there was hardly enough room for two adult passengers in the back seats. Even a child could have trouble fitting in there unless the front occupants had short legs.

Under the hood, Mitsubishi installed a direct-injected 1.8-liter engine, which provided 120 hp. The carmaker paired it either with a five-speed manual or a four-speed automatic. Unlike other SUVs, the Pinin featured Mitsubishi’s SS4-i viscous coupling-type four-wheel-drive system, a smaller and lighter upgrade of the Super Select 4WD system. The system allowed the driver to select from four modes to choose the optimum one for any particular road surface. 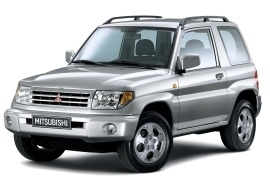