Updated for 2012, the beloved 370Z looked like the modern variant of the 240Z, with its low roofline and the popped out rear fenders.
The 370Z came with 3 versions: the standard coupe, the roadster and the super sporty Nismo.

The power was sent to the real wheels through a 6-speed manual transmission.

The 370Z was fitted with a small, cozy cabin, that offered great legroom and headroom for the people in the front seats. The dashboard had a simple and clean layout and offered a decent storage space in the center.

The load area was not the best, as the trunk was shaped by the shock towers, thus limiting the available space. The strut bar in the back, although great for rigidity, blocked longer items to be placed in the trunk. Tall objects were also hard to fit in the trunk due to the trunk’s glass lid.

The visibility inside the 370Z was rather poor, the B and C pillars forming a block in the driver’s vision, making it harder in passes.

The cabin was driver-focused, with additional gauges indicating voltage and oil temperature. The driver could adjust the steering wheel and the cluster altogether.

The 370Z ran on 19-inch beautifully designed alloys borrowed from the GTR. Wider tires were used in the back. 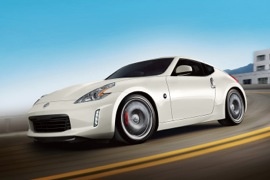