While the fifth generation of the Altima sedan was introduced at the 2012 New York Auto Show, the coupe version received a mild facelift where it gained some, and it lost some.
The design team took its inspiration from the acclaimed GTR when it drew the lines of the Altima Coupe, but it had to keep the front-wheel-drive platform from the regular Altima. It was the last year when this body shape was offered. Starting with the fifth generation, the carmaker dropped the two-door version.

At the front, the designers took the shape of the headlights from the GTR, with a swept-back look on top of the fenders. The wide grille between them featured a chromed surrounding. Unlike the rest of the Altima range, the coupe version featured a bulge on the hood, evoking a sportier character. Its raked windshield, short roof, and long, sloped rear end resembled the 370Z shape.

Inside, it was a 2+2 configuration, but due to the low interior height, it might be considered only as a two-seat option. In the back, only a couple of toddlers might be seated. Nissan offered the Altima Coupe with only one trim level. It featured a six-speaker sound system and a 4” monitor. At least, the infotainment unit featured Bluetooth connectivity.

Under the hood, Nissan dropped the 3.5-liter V6 engine and left only the 2.5-liter four-mill under the hood. The standard transmission was Nissan’s CVT gearbox with paddle-shifters behind the steering wheel. 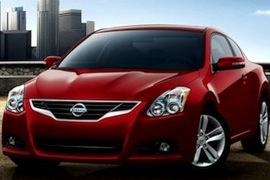