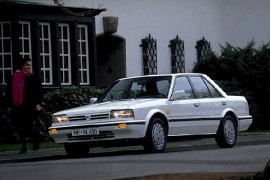 Nissan opened a brand new factory in the U.K., and the first car that rolled down from the assembly line was the Bluebird, which became a very successful model for the Japanese carmaker.

While its models were known for their reliability and useful features, the design and the performances slacked behind the other European or British carmakers. But that was changed in 1986 when Nissan introduced the T12 generation Bluebird on the market.

Its wedged-shape was similar to other cars from those times. The front fascia featured rectangular headlights and grille, while the body-colored bumper sported a black rubber trim and the turn-signals. On the sides, the carmaker didn’t consider painting the door-handles or mirrors, the same as most other vehicles from those times. In the back, the trunk lid continued the slightly ascending beltline of the bodywork.

Inside, the squared-looking style continued on the dash with straight lines. Even the vents were squared with horizontal slats. The only rounded shape was on the inboard side of the instrument cluster. It was the era o electronic watches, and Casio was the king of the new generation. Nissan noticed that and introduced an LCD on the instrument panel’s bottom for, you guessed it, the clock.
The Japanese carmaker continued to load its cars with tons of features, usually available only for the premium segment, such as four power-windows, power mirrors, sunroof, and a radio-cassette player on the dash.

Under the hood, Nissan played safe with a choice of three 2.0-liter engines; two gasoline and one diesel. The gasoline units provided enough power to embarrass other cars, while the diesel was sluggish but shined with its impressive fuel efficiency.