Nissan built its name on the utility vehicles since its cars were named Datsun in the ’30s.
Over the years, it became famous for its pickup range and, in Europe, especially due to the Nissan Navara.

In 2015, this model surprised the market by launching the first vehicle in its segment with coil springs at the rear, whereas all the others offered leaf-springs. And the list of surprises was even longer.

Some things are as good as they are and the Nissan Navara/Frontier Double Cab is one of those vehicles, having been praised around the world. Its stylish look with big front fascia and overfenders on the front wheel-arches and curved window line were far from a regular, workhorse, pickup-truck.

Inside, there was a 5-seat cabin with enough room for adult passengers both in front and in the rear. Depending on the trim level, the car was fitted with a touch-screen infotainment unit on the center stack. On the center console, there was the gear-stick or the selector for the 7-speed automatic gearbox. The base trim level featured only air-conditioning, power windows, and a CD-Radio.

Under the hood, there was a 2.3-liter turbodiesel engine from Renault, but both variants of it are twin-turbo. The entry model offered 160 hp. The top version had 190 hp. The standard transmission offered was a 6-speed manual. 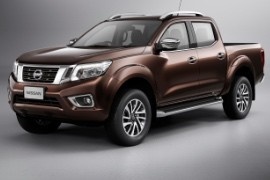