Nissan introduced the twelfth generation of the Skyline sedan in 2006 only for the Japanese market, while the rest of the world, including the U.S. customers, received the Infiniti M series.

The 2006 Skyline sedan was the sporty version of its famous brother GT-R, but it was less-powered and rear-wheel-drive only. It was sold only in Japan, while the U.S. market and the rest of the world received it as an Infiniti M35. It was the same car, but with RHD and different badges. There were also a few other noticeable differences between the two siblings.

Unlike its predecessor, it followed a new, flowing-design trend, with swept-back headlights that resembled those installed on the Infiniti G35 Coupe. Its raked grille sported four horizontal slats and additional two chromed ones on top and on the bottom. The bumper featured a lower apron with an incorporated spoiler. Nissan included the fog lights inside the headlamps, on their inner side. The designers made the rear window sloped and the decklid short to emphasize the car’s sedan orientation for sportiness.

Inside, the high bolstered seats at the front were inspired by those from the G35 Coupe. Nissan created a unique design for the instrument cluster, without individual casings for the speedometer and tachometer. The Skyline featured a screen for the infotainment system similar to the one from the Nissan Primera, controlled via a distinct control panel on top of the center stack.

The carmaker offered the Skyline with a choice of three V-6 engines, starting with a 2.5-liter and ending with a 3.7-liter. Depending on the engine, the carmaker paired the powerplants to a six-speed manual or to a five- or seven-speed automatic transmission. 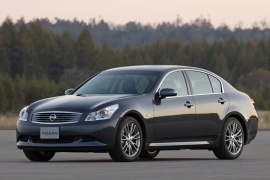