The Japanese carmaker introduced the second generation of the Teana lineup in 2008 at the Beijing Auto Show, and it proved that Nissan could offer luxury vehicles outside the Infiniti badge.
Nissan was on the verge of upgrading its lineup and introduced a large sedan on specific markets worldwide. It wasn’t available everywhere to not interfere with the Renault Latitude in Europe or with the Maxima in the U.S. But it shared the same qualities that made those vehicles good in their class.

Long as an executive sedan, with not a single flat surface on its bodywork, the Teana showed no fear in front of competitors such as the Audi or Jaguar. Its wide grille with horizontal slats and swept-back, vertical headlights were unusual for its times. Its raked windshield and curved roof made the vehicle more aerodynamic. Under its sloped D-pillars, the carmaker installed the third row of windows behind the rear doors.

Inside, the Teana featured the same infotainment system used for the Infiniti range, with a controller on the center stack’s upper side. For the base models, Nissan offered the vehicle with a velour interior. The upper trim levels featured leather upholstery and wood-trims on the dashboard, center console, and door panels. Thanks to its long wheelbase, the rear seat passengers had enough legroom and headroom.

Under the hood, Nissan installed three engine choices. They were all paired to an X-Tronic gearbox (CVT), which sent the power to the front wheels. 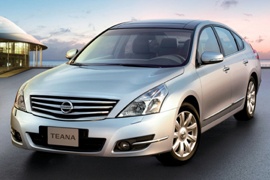