The Terrano name was successful in the European and other markets around the world, but it was axed once the Japanese carmaker went into an alliance with Renault.
But, in 2013, they brought it back.

Being into an alliance with Renault brought some advantages to Nissan. Even though the Japanese carmaker was an expert in the 4x4 sector, it didn’t succeed to make affordable, unibody, SUVs. In Europe, the best SUV recipe was the Dacia Duster, which was sold on some other markets as the Renault Duster. Nissan engineers took that compact SUV and reshaped it in the form of the 2013 Terrano.

Nissan started to work on the car by changing the front fascia to a more recognizable grille from a Nissan Patrol with chromed slats and bigger, angular headlights. On the side, a subtle line was drawn on the bottom of the doors. The liftgate featured an additional light unit on it, to complement the fixed to the body taillights.

Inside the car, there was the same adequate room for a compact SUV vehicle. Five adults could fit inside the car. The multimedia unit was different than the one found on the Renault/Dacia Duster.

Under the hood, the Terrano featured the same engines as the Duster, with front or all-wheel-drive systems. The all-wheel-drive versions featured independent suspensions on all four corners, while the front-wheel drive version was fitted with a twisting beam in the back. 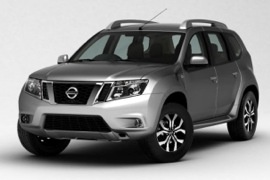