General Motors decided that a 3-door Astra was not convincing enough for its clients.
After the first generation of the GTC version, it decided to continue the saga.

The Astra GTC was well received in 2011 when it was launched on the European market. It followed on its predecessor’s paths, which was introduced in 2005 on the Astra H platform. With results that exceeded its predecessor’s expectations, Opel dared to introduce a second-generation for the three-door compact hatchback in 2011.

At the front, the eagle-like headlights’ design looked sharp, and, along with the wide grille from the apron, it created an aggressive image. The windshield was raked even more than the regular Astra, followed by a short roof sloped toward the back. A long tailgate with a big windscreen covered part of the trunk. Viewed from the profile, the high shoulders over the rear wheels and the small rear side windows emphasized the sporty look.

Inside, there was the regular Astra dashboard. The four-dials instrument cluster featured an LCD display between the tachometer and speedometer. The seats were regular on the base version, but a pair of bucket-type was on the options list. There was hardly room enough for two adults in the back, but the bench’s back seat could have been folded to expand the trunk space.

For the drivetrain, Opel offered the Astra GTC with a choice of gasoline and diesel engines paired to manual or automatic transmissions. 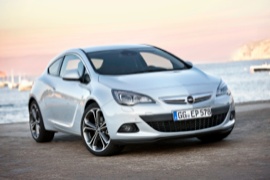