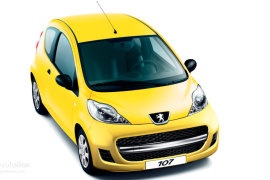 Developed in a joint-venture with Toyota, the Peugeot 107-Citroen C1-Toyota Aygo was a trio of vehicles built in the Czech Republic and sold on the European market in the mini (A) segment.
The carmakers had to refresh their products due to the introduction of the Euro 5 regulation. Peugeot refreshed the 107 as well, starting with 2008. Along with the introduction of the cleaner engines, the Peugeot 107 received an updated design.

The French Lion brand adopted a feline-like shape for the car’s headlights, with the main lamp bigger and cutting a slice from the hood. The front bumper was redesigned and featured fake side-scoops on the outer sides. Unlike the non facelifted version, the vertical bar placed in the middle of the grille was painted in silver.

Inside, depending on the trim-level, the 107 featured a tachometer mounted aside from the center speedometer, installed on the steering column assembly moving along when the driver adjusted its position. The center stack’s simple layout allowed easy use of the HVAC controls—the 107 featured power windows at the front and a compass-based system for the rear ones.

Under the hood, Toyota provided the 1.0-liter gasoline engine and PSA (Peugeot-Citroen Group) the 1.4-diesel version. Both versions were paired as standard to a 5-speed manual, while a 5-speed automated version was available as an option. The latter consisted of a manual gearbox and a computer-controlled clutch-actuator system. 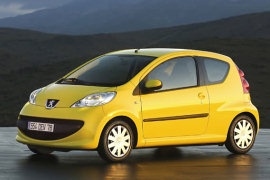 Continuing the supremacy of the 106 which ceased production in 2003, the 107 was jointly developed with Citroen and Toyota, becoming Peugeot’s next big city-car hit.
Part of the B-Zero project between the three manufacturers, the 107 was also rebadged as the Citroen C1 and Toyota Aygo, all three cars being built at the plants in Kolin, Czech Republik.

Although the 107 has not been selected for EuroNCAP tests, the C1 has which means that both in 107 and Aygo’s case, results may be the same. The C1 scored 4 out of 5 stars for adult and child safety and 2 out of 4 for pedestrians.