Peugeot introduced the third generation of the 308 hatchback in 2021 with a design that carried over elements from its bigger brothers from the crossover segment.
The French carmaker was eager to defeat the Golf at its game and tried to attack the segment differently. It was the first Peugeot to sports the refreshed company logo, which showed a lion head instead of the entire feline.

With cues inspired from its award-winning bigger brother 3008, the 308 displayed a front fascia with the vertical LED “fangs” on the outer side. It’s big mesh-grille looked more aggressive than any of its predecessors, while the LED headlights peeked under the hood line. From its sides, its cab-rearward design inspired a rear-wheel-drive vehicle due to its thick C-pillar and curved roofline. Its sculptured side panels and doors formed a complex aerodynamic flow, reducing the drag-resistance factor. At the back, its taillights formed a long smoked line across the tailgate. Despite the downsize and electrification trends on the market, Peugeot installed fake, chromed exhausts under the apron.

The interior looked like its designers didn’t communicate with those who shaped the car’s exterior. While on the outside, the 308 featured long, curved lines, the minimalist dashboard exposed straight lines, hard edges, and F-117 Stealth style surfaces. The steering wheel was unusually low mounted compared to the instrument cluster. Like its bigger brother 3008, the 308 featured a TFT display for the instrument panel and a secondary touch-screen for the infotainment screen. In the back, Peugeot installed a split-folding bench where three passengers could sit comfortably.

Under the hood, the carmaker installed a choice of gasoline, turbo-diesel, and hybrid systems that could offer up to 225 hp sent to the front wheels via a six-speed manual or an eight-speed automatic. 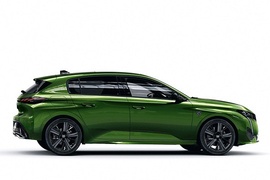