While the MPV market continued to shrink, some carmakers tried and found new opportunities based on LCV vehicles.
Depending on the market, the Bipper was also known as Partner. The second generation of the Tepee Bipper was a joint project with the Italian carmaker Fiat (Fiat Fiorino/Qubo), but it featured some particular styling that made the Bipper/Partner different. It was based on the Fiat Grande Punto platform.

The Tepee Bipper/Partner looked more rugged than its non-Tepee version. Due to its higher ground clearance and black, unpainted, lower plastic parts, it induced the idea of a vehicle suitable for outdoor excursions on unpaved roads. The high-mounted headlights were good against small parking crashes, where they were protected due to the bigger front bumpers. The same recipe was applied to the taillights. There were two regular doors in the front and sliding doors in the back to access the car. A pair of asymmetric rear doors made loading and unloading easy. From the sides, depending on the options, a third set of windows were installed between the C- and D-pillars.

Inside, the dashboard and the instrument cluster were similar to those found in the 2005 Fiat Grande Punto, except for the fact that it featured round air vents instead of squared ones.

Under the hood, the Peugeot Tepee Bipper/Partner featured a choice of three gasoline or diesel engines with power output between 70 hp and 75 hp. While Fiat built the 1.4-liter gasoline and the 1.3-liter diesel, the 1.4-liter was a joint project between Peugeot and Ford. 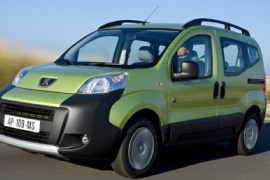