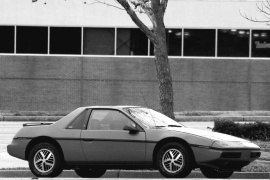 Pontiac tried to attack the sport-compact market with a mid-engined vehicle in the mid-’80s and produced the Fiero, but it failed to convince customers and pulled the plug in 1988.
On paper, the Fiero should have been an excellent vehicle. Something that should eat the Toyota MR2 for breakfast and, at lunch, to outperform any Civic around. Yet, it failed to do any of these despite its Ferrari-like construction. It showed many design and engineering flaws that led to many recalls. And the first mistake made by GM was to market the vehicle as a commuter car, when in fact, it was more like a sports-car.

The exterior, with its wedged lines and pop-up headlights, was outstanding for an American car. Yet, the designers (or the marketing team) didn’t go all the way to install side panels next to the engine compartment, and eventually, the car looked like a three-box sedan with two doors. Later on, they fixed that issue, and it finally looked well.

Inside, the Fierro offered room for two occupants, with a high center console between them. Its high and squared-looking dashboard didn’t look like it belonged in a sports car, but the instrument cluster offered a good view to a wide tachometer. That was extremely useful, especially when the car was fitted with a manual transmission. Pontiac didn’t offer a power steering for the Fierro, and that was a serious drawback since its rack-and-pinion steering system required some muscles.

Under the hood, Pontiac installed a 2.5-liter inline-four engine that produced only 98 hp. That was not enough for a vehicle that weighed over 2600 lbs (1180 kg), unless it was considered just a mid-engine commuter vehicle with an excellent fuel-efficiency.