The Porsche Carrera Cabriolet was introduced along with the Carrera Coupe, in July 2019.
It offered 15 hp more than its predecessor and an open-top to enjoy the drive.

There was a long road between the first, naturally aspirated, Porsche 911, and the 2021 Carrera Coupe. While the first 911 was for pure sports driving experience, the eighth generation was a mix of performance, elegance, luxury, and exclusivity.

The front side of the car featured the same round headlights design but evolved. It featured the four-dots LED daytime running lights signature. The bigger apron in the front featured bigger air-intakes since the Carrera featured a twin-turbo engine and it wasn’t naturally aspirated anymore. The flush to the bodywork pop-out door handles looked smooth. Interestingly, the car was fitted with 19” light-alloy wheels at the front and 20” for the rear axle. Behind the rear seats, there was the storage area for the soft-top. A big panel will go back and the roof will disappear underneath. With the roof up, the sleek form of the classic 911 shape was kept. In the back, on the soft-top storage compartment’s lid, the third stop-light showed the 11 number when it was lit.

Inside, the Carrera Cabriolet was fitted with all the comfort and luxurious items required by an exclusive sports-car as the Porsche 911. The sport seats and the finishes had a premium look. The instrument cluster featured the classic five-dials, but only the tachometer was analog. The other four were TFT displays. A 10.9” screen for the PCM (Porsche Communication Management) was installed in the middle of the dashboard.

The flat-six under the engine lid was a 3.0-liter turbocharged engine that cranked up 385 hp. It was mated as standard with the new 8-speed automatic (PDK) transmission. 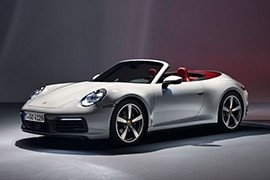