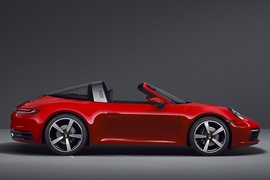 The best compromise between a convertible and a coupe was a Targa bodywork.
It used to be the right answer for a stiff construction and the beauty of driving under the sky.

While the first models featured a plastic rear window and a soft top, the 2020 Porsche Targa 4 model featured a wide panoramic rear windscreen without a C-pillar and a soft top that was retracted at the push of a button and disappeared in 19 seconds behind the cabin.

The front side of the car was impressive with the new design for the bumper and apron. It was like the engine department and the brakes department struggled to get more air-scoops in the front of the car, and the result was an almost even distribution for all of them. The B-pillar was silver regardless of the car’s color. In the back, the third brake-light mimicked the 11 number when it was lit.

Inside, the Carrera 4 was fitted with all the comfort and luxurious items required by an exclusive sports-car as the Porsche 911. The sport seats and the finishes had a premium look. The instrument cluster featured the classic five-dials, but only the tachometer was analog. The other four were TFT displays. A 10.9” screen for the PCM (Porsche Communication Management) was installed in the middle of the dashboard.

The flat-six under the engine lid was a 3.0-liter turbocharged engine that cranked up 385 hp. It was mated as standard with the new 8-speed automatic (PDK) transmission, but a 7-speed manual was available at no extra cost. The all-wheel-drive system was enhanced for fuel-efficiency. The Porsche Activ Suspension Management was standard equipment. 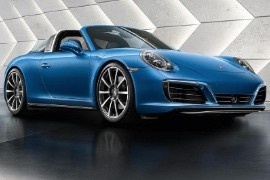 The Targa came a long way since 1955 from the removable top and rear plastic windscreen that folded into the front trunk and evolved into a unique system on the market, with a coupe-cabriolet uncover style.
The Targa 4 was unveiled at the North American International Auto Show in 2014. It was expected, but the way it removed the top of the greenhouse was not. It was not a convertible, and it could have been uncovered only by standing still. The rear windscreen popped out and moved backward, the security arch was dismantled and allowed the soft-top to go down behind the rear seats, and then the rear glass and the security arch was assembled back together. That left the car with the frameless door windows and nothing more above the front seat occupants.

The Targa 4 featured new headlights featured 4-points daytime running lights. Overall, it looked similar to the 2016 Porsche Carrera 4 up to the A-pillars, but the B-pillar was silver regardless of the car’s color. Behind it, it was a huge curved and sloped lightweight laminated glass windscreen. Since it was based on the Carrera 4 platform, it featured wider rear fenders than the regular Carrera.

The interior of the Targa 4 featured standard sport seats with 14-way power adjustments. There was an option for Adaptive Sport Seats with 18-way adjustments.

The engine was still a twin-turbo flat-six unit and able to deliver 370 hp. It was mated to a 7-speed manual transmission fitted as standard or to the optional 7-speed PDK unit. The all-wheel-drive system allowed good traction in all the weather conditions. 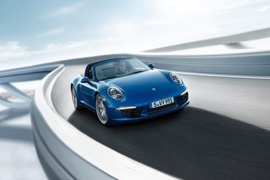 It is amazing how the old Targa-type bodywork has survived into the Porsche lineup.
And, in 2014, it came with an intelligent solution to satisfy the needs and pleasures of the modern age. After the coupe-cabriolet era begun offering a sporty vehicle both as a cabriolet and a coupe, Porsche had a problem. They couldn’t store the whole top in the rear since they have the engine in there. But they had the Targa version. This means, that they could keep the windshield and the rear window in place and remove the top.

In 2104, at the NAIAS (National American International Auto Show), Porsche revealed the Targa 4. The targa bodywork was enhanced by a fully automatic system that allows the driver to remove the top without leaving the driver seat, like in any other coupe-cabriolet. Problem solved for Porsche. But they still had to manage the all-weather vehicle. So, it fitted the car with an all-wheel-drive system. As an option, a dual-clutch gearbox is offered while the standard is a 6-speed manual.

The interior is furnished as a very practical car, with a great driving position and some cupholders, storage compartments and a sat-nav that doesn’t understand Android Auto. But it manages the Apple CarPlay.

And yes, it can go fast, thanks to that flat-six engine in the back that offers with 350 hp from the 3.4-liter displacement. 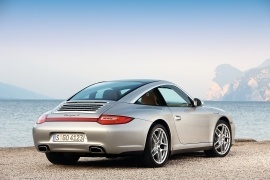 When introduced in its lineup, the Targa version of the Porsche 911 featured a removable roof panel and rear windscreen.
Over time, only the roof remained removable but enhanced.

While building a convertible adds more fun under the open sky, with a decrease in the driving experience due to a decrease in bodywork stiffness, the Targa solution seems to be a better option. It allowed a nice driving experience with the top wide open, but the same stiff construction, since the side pillars and the security B-pillar remained untouched. It added some weight to the roof, but it increased interior luminosity.

The Targa 4 facelifted body version was announced in June 2008 along with the rest of the range. It featured a new glass-roof, which blocked about two-thirds of the sunlight and took only about 17% of the thermal energy. Considering this, it was easier to drive with the glass-roof closed under the sun than in a convertible. An interior fabric roll cover increased the shade from 50 to 96%.

Inside, the Targa 4 featured a cabin better organized than its coupe sibling, due to the rear opening windscreen. That allowed an increase for the storage compartment behind the rear seats. With the seatbacks folded, the result was a storage compartment larger and more convenient than the trunk itself.

An important upgrade for the 2008 Targa 4 was underneath the car. It featured a 3.6-liter engine that cranked up 345 hp, 40 hp less than its 4S sibling, which had a 3.8-liter unit. A new, PDK 7-speed dual-clutch gearbox was installed on the car, replacing the older 6-speed automatic. 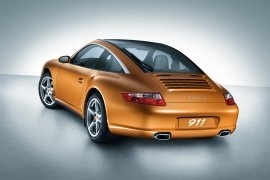 Targa 4 was introduced in 2006 as a version for the Porsche Carrera 4 – 997.
While it was heavier than the coupe-version, it featured a glass-top that opened wide to the back.

The airy feeling into a glass-roof vehicle cannot be described. The Porsche management decided to come back on the market with Targa versions for the 911 – 997 generation. That meant to have a removable side of the roof, over the front seats. The idea was not entirely new, but the way it did it, it was.

The car featured two glass panels that blocked the ultraviolet radiation but remained transparent. Thus, the heat transfer was smaller than on a regular glass panel. To offer better protection, a power shade was included. The front part of the glass slid opened and offered a true Targa experience. Unlike other 911s, the Targa 4 featured hatch-style access. The rear glass was a tailgate, with hinges mounted over the B-pillars. That allowed it to open and provide access to an additional, 230 liters (8.1 cu-ft) storage area behind the rear seats. The roof was opened and closed in seven seconds.

The interior was offered with a choice of two steering wheels and four types of seats. The PCM (Porsche Communication Management) was fitted as standard, but the DVD-based navigation system was on the options list.

For the engine, the Targa 4 offered a 3.6-liter engine that offered 325 hp. It was mated as standard with a 6-speed manual, while a 5-speed automatic with manual override (Tiptronic) was on the options list.