The return to the V8 engine for the Porsche Cayenne GTS was a milestone for the German SUV: it was the first time when the GTS outpowered the first generation of the Cayenne Turbo.
When the first generation of the Cayenne was introduced to the market, its top-model was the 450 hp Turbo version. Over time, a naturally aspirated V8 was offered for the GTS range, which was downsized to a twin-turbo V6 unit. From 2020, the GTS kept a pair of turbochargers but moved back to a V8 unit. It was, again, one of the best-balanced options for the Cayenne.

The twin horizontal blades on the front grilles, the vertical slats that divided the three-wide air-intakes on the apron and the LED bars under the headlights were just one of the few strong points of the 2020 Cayenne GTS. In the back, the raked D-pillar with the roof-spoiler on top of the tailgate inspired force and performance. Four big round exhausts were installed under the rear apron.

Inside, the Cayenne GTS featured the new 12.3” Full-HD touch-screen from the Porsche Communication Management infotainment system. For the instrument cluster, only the tachometer remained analog and it was flanked by two 7” displays, needed for other relevant driving data. The front sport-seats featured the GTS logo embroiled on their backseat. The Alcantara upholstery and the red stitches were part of the version’s sporty appeal.

For the drivetrain, the Cayenne GTS was fitted with a twin-turbo 4.0-liter V8 engine. It offered 20 hp more than its predecessor, reaching 460 hp. It was paired to a standard 8-speed automatic gearbox. Due to the sport suspension, it sat 20 mm (0.8”) lower than the rest of the Cayenne S. 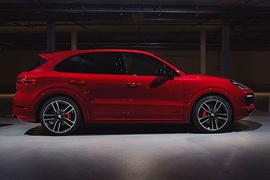