While in the ’80s the station-wagon cars were at their peaks, over time the market switched to MPVs and, later on, to SUVs.
But station-wagons didn’t die, they just got better.

The Porsche Panamera Sport Tourismo was a good example of how a station-wagon can get better. For some, it looked even better than the regular Panamera. In terms of practicality, it featured a bigger trunk and more headroom for the rear passengers. For the 2020 model year, the facelifted version received few updates.

The 2020 model Panamera Sport Tourismo Turbo S featured a different front fascia than the rest of the range, with new grilles in the apron and two pairs of light strips for the daytime running lights. It was fitted with standard LED headlights. On the sides, the 21” light-alloy wheels featured a specific design. In the back, the rectangular exhausts under the apron improved the car’s look. The roof-spoiler installed on top of the tailgate featured the third brake light.

Inside, there was not uncommon to see sport-bucket seats in a Porsche. What was unusual was that the Sport Tourismo had that option for the rear seats as well, or it could have been fitted with a bench for three adults. On the dashboard, it featured the already known Porsche Communication Management infotainment system with a 12.3” touch-screen display mounted at the same level as the steering wheel, on top of the center stack.

The 2020 Panamera Turbo S Sport Tourismo featured the same twin-turbo V8 engine as the GTS or the Turbo version but tuned to offer 630 hp. Its performances were on par with other supercars, obtaining a 3.1 second for the 0 to 100 kph (0 to 62 mph) run, the same as the regular Panamera Turbo S. 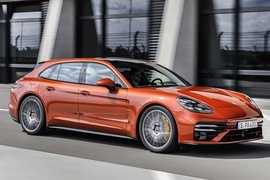