The Malaysian carmaker Proton introduced the third generation of the Saga in 2016, and it was a four-door sedan for the small segment.
Proton started with know-how from Mitsubishi and built a few lineups together with the Japanese carmaker. In 1985, it introduced the first generation of the Saga, based on the Mitsubishi Lancer Fiore (Colt Sedan), and continued to work on it.

The third generation of the Saga was not the big step forward expected. The design team was either replaced or under-payed to create the new lineup where the headlights seemed to be too big for the front fascia, and the trunk looked like it was added after the rest of the car was ready to roll on the assembly lines. In the rear, the design team took a similar approach as on the front side and installed big taillights that crossed from the quarter panels to the trunk-lid. Even though the third generation was introduced in 2016, the base models featured 13” steel wheels. Only the full-option CVT Premium version received standard 15” alloys.

Inside, there was an air of cheap materials with hard plastic on the dashboard and a squared-looking instrument cluster that looked older than on older Proton vehicles. The interior design was clean, with a decent amount of space for four passengers and limited room for a third passenger on the rear bench. The one-piece fold rear seatback allowed an increase in the trunk area, but there was no split-folding option.

Under the hood, Proton installed only the 1.3-liter engine and paired it as standard to a 5-speed manual gearbox. The carmaker offered a CVT transmission on the Saga’s options list. 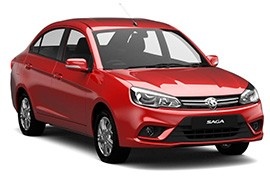